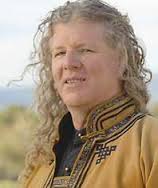 Martín Prechtel  was raised on a Pueblo Indian reservation in New Mexico, where he learned the Keres language. His mother was a Canadian Native American and his father a Swiss palaeontologist. In 1970 after his first marriage ended, he traveled south through Mexico to end up in Guatemala. After a year of traveling through Guatemala, he found his home in a small village near Lake Atitlan inhabited by the Tz'utujil (one of the numerous Maya sub-cultures). There he met Nicolas Chiviliu Tacaxoy, a respected shaman of the village who believed Prechtel to be the student he prayed for.

He learned the Tzutujil language, married a Tzutujil woman and raised two sons (a third son had died). Though not Tzutujil by birth, Prechtel became one of the most important village members both spiritually and politically. When Chiviliu died, Prechtel then became acting shaman to the approximately thirty thousand people of Santiago Atitlan. Prechtel joined the Scat Mulaj (the village political body) and even rose to the position of Nabey Mam (the first chief), and among other duties was responsible for the initiating of the village's young men into adulthood. During the Guatemalan civil war, Prechtel and his family were forced to flee for their lives and settled in the U.S. His wife returned later with their two sons to Guatemala, but the two boys then came back to their father.

Upon returning to the U.S. Prechtel was introduced to author Robert Bly and began contributing at Bly's Men's Movement workshops. Bly was instrumental in getting Prechtel's writing published. Prechtel once again resides in New Mexico, at the site of his school near the village of Ojo Caliente. He appears around the world at different educational conferences and leads workshops intended to assist in the reconnection to the sacredness in nature and everyday life, and in finding one's sense of purpose in the modern world. Colleagues include Robert Bly, Malidoma Somé, and Michael J Meade.

Among his writings are Secrets of the Talking Jaguar, an autobiographical account of his initiation as a Mayan Shaman; Long Life, Honey in the Heart, an account of his village life in Santiago Atitlán; Stealing Benefacio's Roses: A Mayan Epic (Formerly Titled The Toe Bone and The Tooth), an autobiographical account of how he relived an ancient Maya myth in his own life; and The Disobedience of the Daughter of the Sun, a Maya myth that includes Prechtel's observations of how the Maya relate to the story. His works also include various musical recordings, paintings and an audio recording of a lecture he gives called Grief and Praise. He orchestrates "gatherings" and workshops around the country as well as curating his own school called Bolad's Kitchen.
Posted by barrydh at 09:04

Add comment
Load more...
Newer Post Older Post Home
Subscribe to: Post Comments (Atom)
IF YOU GET AN ERROR MESSAGE WHEN TRYING TO PLAY THE PODCAST: Some of our podcasts are m4a files not mp3. M4a files will play on most operating systems. Firefox or Opera users experiencing problems playing the files, please try Google Chrome or Safari or another browser.
For the mp3 podcasts, if you need to download an mp3 player, click on one of these links:
Download Windows Media Player
Download iTunes
Download RealPlayer